Payrolls this week from ABS included some rather substantial revisions. Typically this series has shown upward revision of the most recent data points with subsequent releases. The latest release also includes significant downward revisions to earlier data in Cairns: 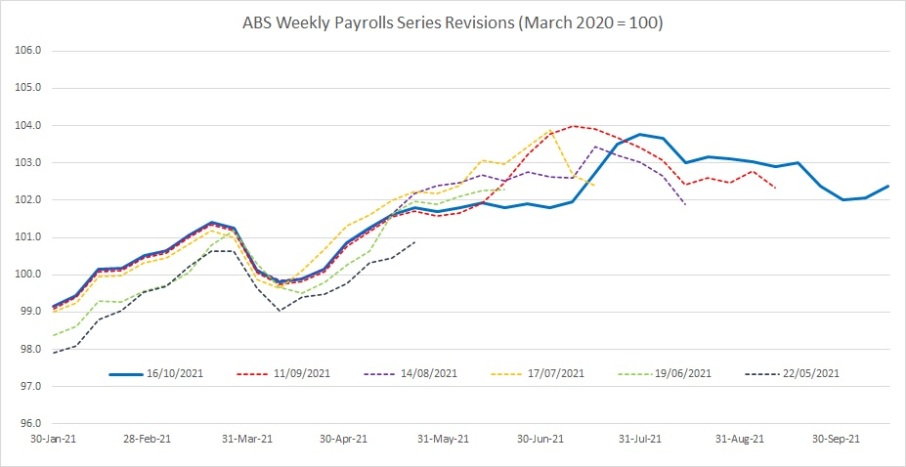 Sorry if this graph is confusing which shows revisions back to May with subsequent data releases. There is still an upward revision to the most recent previous data points but a downward revision prior. ABS:

Revisions around the end of financial year

This release sees higher than usual revisions in July, as the 16 week imputation retention threshold passes through the end of the financial year and commencement of Delta lockdowns. This period saw increased lags in reporting in lockdown areas, in addition to higher than usual variability around the end of the financial year. These factors contributed to some over-imputation in July, which is now being removed alongside the receipt of more complete data. Users should use caution when referring to estimates across July.

The ABS has previously advised caution in using the most recent periods in payroll jobs by employment size indexes, which are subject to higher than usual revisions over a longer period – particularly for small employers. These indexes are more heavily influenced by changes in reporting behaviour and reporting obligations than other indexes, affecting the interpretation of underlying change in labour market conditions. A month lag in the reference week has been introduced to provide more stability at the end point of these series. In this release, the latest week of data for these indexes is for the week ending 11 September 2021.

The payrolls series was introduced in response to the covid pandemic and while it remains a work in progress still provides useful data to fill the flaws in the regional labour force survey. Queensland SA4 regions: 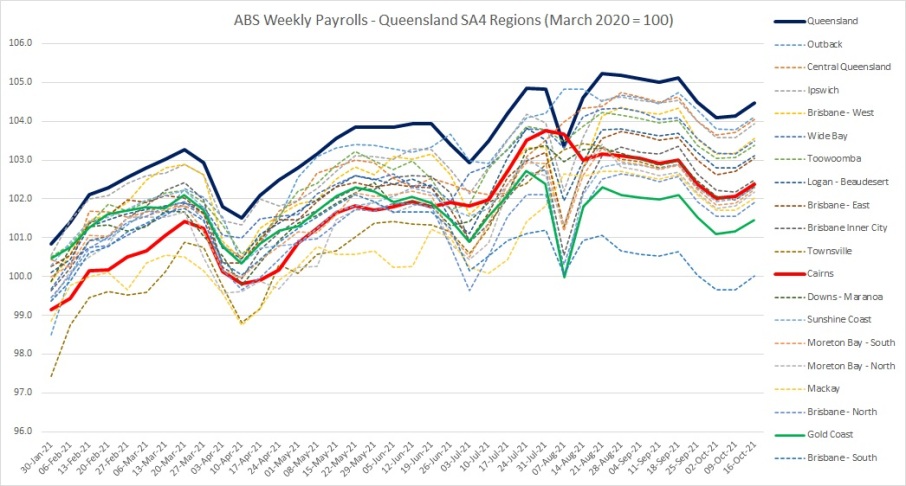 As noted previously following correspondence with ABS direct comparisons between regions and Queensland state data are flawed because not all data can be related to a region. Consequently we have the situation in the above graph where every Queensland Region is below the Queensland state index.

Townsville is the median Queensland region with Cairns very fractionally below if we rank the regions by current index level based on the week to March 14 2020 = 100. SA3 Regions within the Cairns SA4: 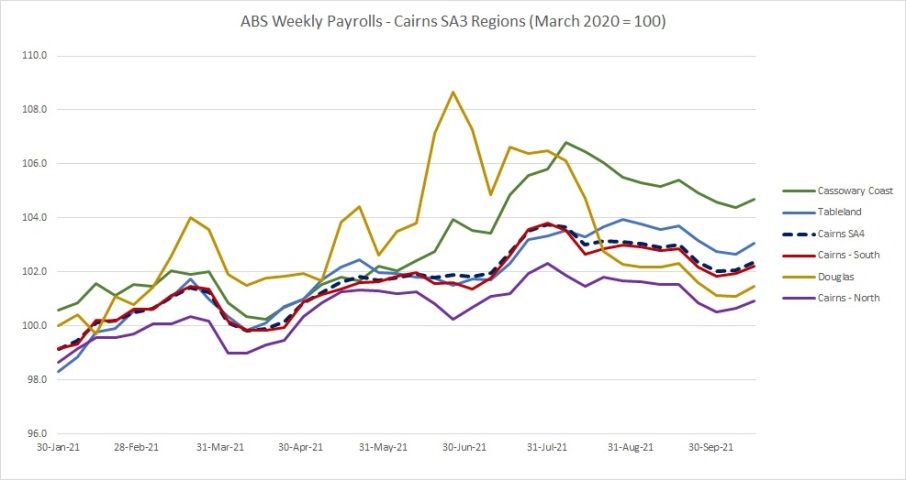 We don’t have the same geocoding location issue here as with the state v regional data. The Cairns SA4 tracking where it should be closely hugging the core Cairns – South SA3.

Cassowary Coast and Tableland top the table. Douglas is the volatile tourism bellwether but also the smallest population region. Cairns – North is the most interesting.

Note: I have also highlighted Gold Coast on the SA4 regional graph.