To follow the previous post a look at Cairns rental bonds lodged which fell at September 30 2021 to their lowest level since the September quarter 2013:

The Y axis here has been truncated for emphasis. To look at this on a normal scale by postcode:

The rental share of central postcode 4870 has also returned to a multi year high with 53.6% of rental bonds as numbers have fallen in surrounding postcodes: 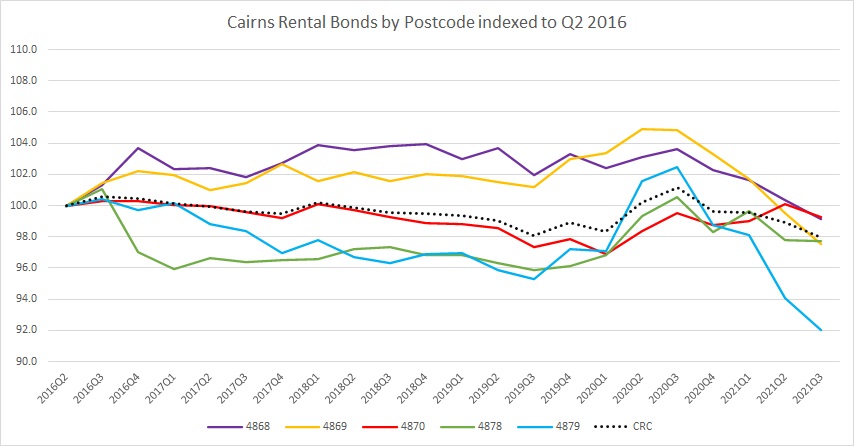 Interesting trend correlation between 4869 (Bentley Park-Edmonton) and 4879 (Northern Beaches) which tend to be demographically divergent and also a different house/unit rental stock mix.

Would have to suspect some movement to home ownership in these postcodes. Postcode 4879 where rental bonds held have fallen by 10% from the pandemic peak a year before also has a high number of AirBNB style accommodation properties.

For context a comparison of Cairns v Townsville to Q4 2020:

Relative demographic shifts were obvious in the 2016 census and will likely be so again in the 2021 census. Cairns has reverted towards the mean over the last decade in rental bonds as a proportion of population which is now about the same proportion as Townsville.