JobSeeker numbers last week showed further ongoing July decline in the Cairns SA4 region ahead of the August lockdowns. The decline had closed towards March 2020 levels as a percentage of of working age population derived from the ABS labour force series.

Again, and from my very first post last year on this, simple percentage changes can be misleading between regions where they are not all from an equivalent base because of different regional socio-economic and demographics factors. This is emphasised by a breakdown to SA3 level within the Cairns SA4; 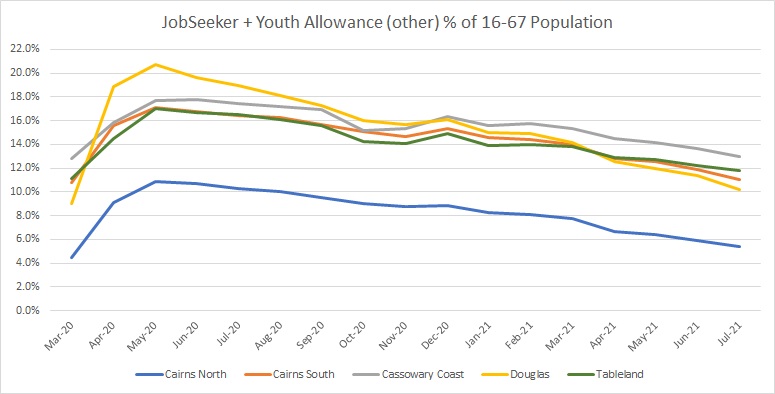 Cairns North SA3 has a significantly lower structural level of JobSeeker recipients relative to population*. However levels as a percentage of the relevant age cohort remain further above March 2020 levels than all but Douglas.

SA2 level data reveals a quandary. SA2 regions which have shown declines since March 2020 in both numbers and a proportion of the age cohort population are weighted to the more disadvantaged with a higher indigenous population. This is a significant contributor to why Cairns South and Cassowary Coast have returned close to March 2020 levels.

What this should somewhat dispel is the concept that JobSeekers in Cairns have remained significantly elevated above pre-covid levels as represented in the flawed Conus methodology which combines two related but different series. August is likely to reverse the recent trend.

Noted also that the paper from Peter Whiteford on RoboDebt is now available by open access: Debt by design: The anatomy of a social policy fiasco – Or was it something worse?

* Population here is derived from the most recent SA2 by age data to June 2019 for the age cohort eligible for JobSeeker and Youth Allowance (other). Population for 2020 release is scheduled this Friday.