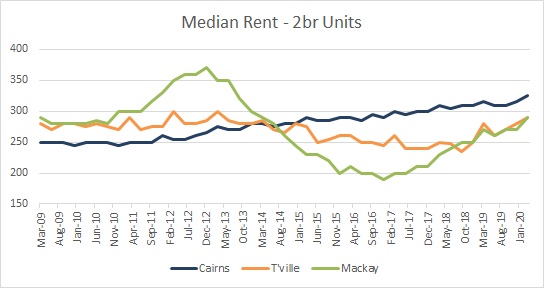 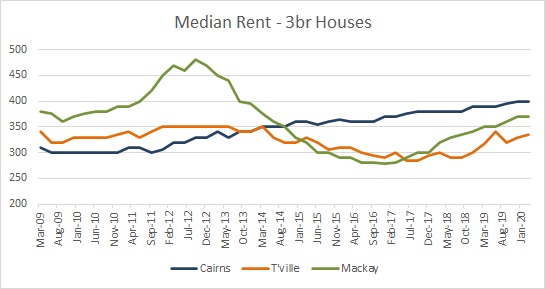 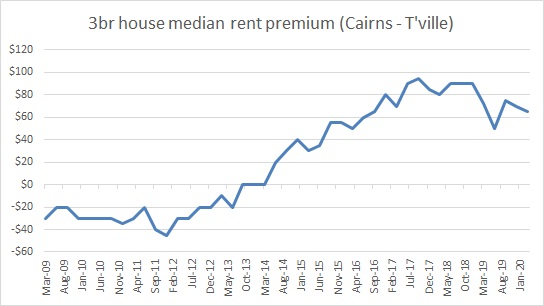 The equivalent quarter last year was the Townsville floods with the conniptions around that now working through. This data is new rental bonds over the period of the quarter so the coronavirus impact will only be the latter period and January is typically a higher activity month with movements around the calendar and school year.

I’m a bit wary of that apparent bounce in 2 bedroom units for Cairns following a few flat quarters. This doesn’t appear in postcode 4870 where two thirds of rentals are located and appears to be skewed by the northern beaches postcodes. We see this also in previous median land values at CairnsWatch where changes in land values reflect a switch in the median between the beaches and the south rather than equivalent movement.

There are issues with this data and have challenged details in the past. However it is a consistent series which is referenced by respected commentators derived from online data, despite that obvious anomaly back in 2010. The recent bump even prior to coronavirus also corresponds with the rent roll survey from CairnsWatch which is similarly showing levels around two year highs.

The unwatched data here remains lodged rental bonds at the end of quarter which declined in Cairns Regional Council by 0.6% over the quarter and 225 bonds or 1.0% over the year. Cairns remains somewhat exceptional on this relative to other regions with a multi year decline not replicated anywhere else.