Chinese travellers lead the way down under was how the ABS led with the latest overseas arrivals data. China may have overtaken New Zealand but has slowed significantly from previous levels: Short term arrivals data shows Chinese growth slowing further

To update from last month: 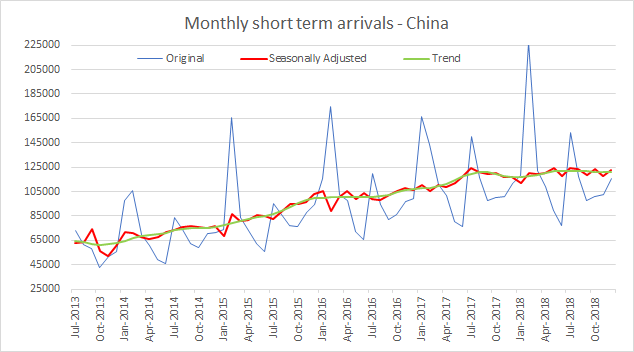 December is a more average month in the volatile Chinese arrivals but not sure the most recent months haven’t been just slightly more positive?

Much neglected is the purpose of visit data:

Education may lag a long third behind Holiday and VFR (Visiting Friends & Relatives) over the year but get a load of those peaks around the university calendar. This was a significant  factor in 2017 correlated with Chinese arrivals. Which is why I think in our FNQ context that maybe we should be looking here:

Sydney Airport updated for January today and reported January growth in Chinese numbers at 20%. However this was attributed to end of month traffic with the Chinese New Year period moved forward to earlier February. Domestic at Sydney was flat following recent weaker months.