Cairns Airport passenger numbers for August have been posted just a few weeks after the delayed July data. Nothing much changes with domestic growth for the month at 1.8% and international at 3.4%. August is typically the peak seasonal month for international while it is July for domestic. That leaves annual growth gliding along at a lower slower growth trajectory.

BITRE now have comparison data for the top 20 airports year to June. These are reported on a slightly different basis to the numbers directly from the Airport and are presented here ex-Proserpine where the aftermath of Cyclone Debbie last year continues to mess with the Whitsundays. 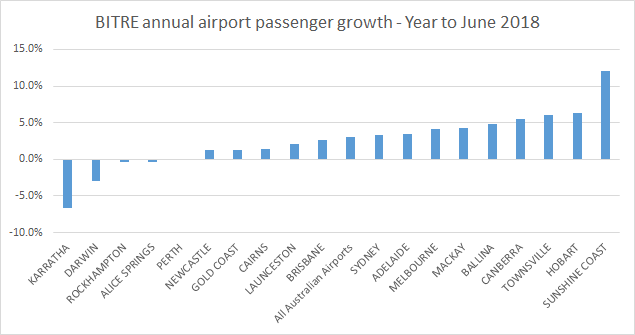 Just as well Gold Coast had the benefit of the Commonwealth Games during the year to boost their traffic numbers eh.

There are more than 50 submissions posted so far, including from North Queensland Airports (Cairns and Mackay), which I haven’t had time yet to peruse. The Qantas submission has attracted some media reports for taking a swing at the market power of the airports.

Something to keep on the radar given the significance of the airport to Cairns. Privatisation of the airport by the Bligh Government in 2008 was specifically linked to funding the Cairns Hospital expansion.