While awaiting more contemporary monthly numbers from Cairns Airport in the meantime BITRE have updated their top 20 airport stats to April. This pretty much takes us through the period of early calendar months where lunar and climatic events make a mockery of any attempt at seasonal adjustment or trend analysis.

Cyclone Debbie continues though to play havoc with some of these numbers. The extraordinary 43.6% monthly growth for Rockhampton is because the airport was underwater for a period last April. The annual growth league table ex Proserpine which is also a Cyclone Debbie outlier. 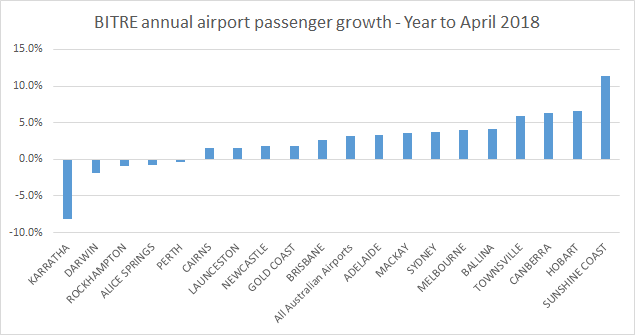 Cairns has dropped two further places down the table since last month at 1.5% annual growth below All Australian Airports at 3.2%.

The table is also compressing from both ends so to speak with Sunshine Coast starting to nudge back while Karratha starts to pull up. Maybe I should go back and check my spreadsheet numbers but this looks like the first monthly growth number for Karratha since 2013 during which time passenger numbers have halved. Caution on that because changes in routes can make big differences for these kind of places as it has with Mt Isa and have no idea how this works over in the west.

Another point particularly to note is that it’s difficult to find anything significant in the Gold Coast Airport numbers around the Commonwealth Games for either March or April. The Games started immediately after Easter and ran from April 4 to 15.