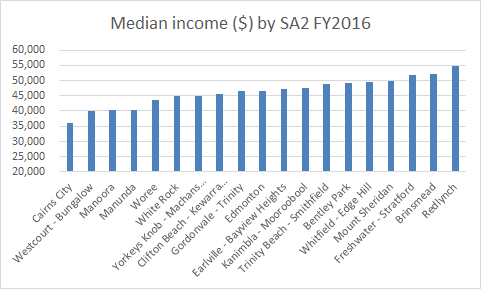 This is different from the 2016 census where Cairns City SA2 median personal income was above the Queensland median. Presumably this represents the difference between the flow of short term income earners through the City such as backpackers etc over the course of the year rather than the census snapshot in August 2016, although there could be other explanations..

Among the most regrettable experiences (but biggest learning experiences) of my life was working the ground follow-up to the 2016 census in Cairns. Never again. It was the most demoralising public service employment experience of my life. This follow up in the area covered targeted exactly this demographic and was completely stuffed up IMHO even in the context of the wider 2016 census failures. I have no confidence whatsoever in the census data around this subset.

Consequently there is no reason for confidence around this in the ABS labour force sample either.