However we need to be a bit cautious as this kind of monthly volatility is typical with the lunar influenced shifts in early months of the year and so far is a blip on the 12 month moving average.

The lunar factor and also last years poor season come into play as these February numbers are off the back of negative monthly results last year for both domestic and international. Commentary on the recovery from last year is noted at Conus: TTNQ claim Chinese New Year as a success for FNQ

The lunar calendar will continue to influence subsequent months with Easter moving from mid April to commence in March and some consequent adjustment in school holidays.

During Chinese New Year, accommodation in the city was close to capacity, especially at the five-star hotels, with a number of apartments and mid-range hotels also reporting strong Chinese figures.
Across the Cairns area there was 86.1 per cent occupancy, up 4.6 per cent from the previous February, while Palm Cove showed the greatest increase with a 19.3 per cent boost to occupancy bringing it to 53.1 per cent, and Port Douglas had 35.1 per cent occupancy, an increase of 4.3 per cent.
Occupancy across Tropical North Queensland was up 5.6 per cent to 68.6 per cent and the revenue per available room also grew across the region, up 17.9 per cent to $106 a night.

This kind of commentary always reminds me of the classic XKCD cartoon: 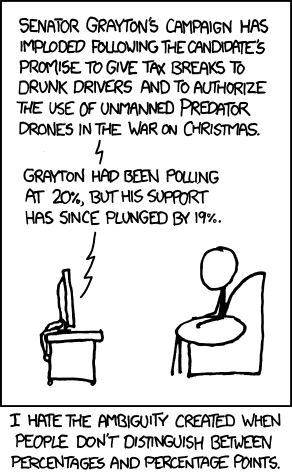 Also to consider in those accommodation numbers is the removal of Tradewinds for complete renovation by GA Group. I did see reduced capacity in the upper market segment in Cairns mentioned in a recent report from Reef Casino.