To follow up on the previous post and comment on employment accessibility by car, geographical factors could also come into play. The regional cities in the framework report are defined by the SUA (Significant Urban Area) from the ABS. While the Gordonvale SA2 in included in the Cairns-South SA3 it is excluded from the Cairns SUA.

Measured by the road distance criteria Gordonvale Urban UCL (which starts at Draper Rd) is 7km from the Edmonton boundary so is 2k too far away. 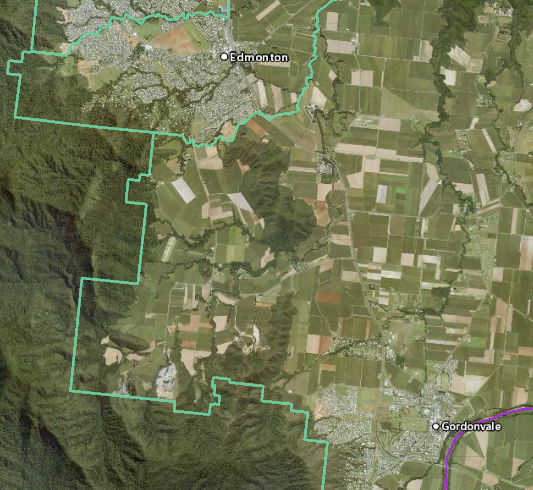 The SA2 boundary is the green line. So the exclusion of Gordonvale leaves out one of the faster growing suburbs and the entire Mt Peter planned precinct. Gordonvale SA2 was second only to Trinity Beach – Smithfield for residential building approvals in 2016/2017. I would have thought this a not insignificant (sic) problem in the context of the objectives.

This situation appears not to apply in this way to other regional centres like Townsville and Toowoomba where the contiguous SA2’s can extend well beyond the urban area. Yes, I am cynical (as always) about the position of Townsville in the traffic and jobs analysis. I’m sure getting in and out of the city from the suburbs at peak times can be an issue just as it is here and elsewhere. However, Google Maps tells me a keen worker can get from outer southern Kelso up to Rollingstone to pick pineapples faster than you can drive from one end of Cairns to the other. Consequently I am sceptical of the methodology and its value.

While the regional cities are ahead of the capitals for car accessibility they are often lacking in public transport.  The geography of Cairns and location of facilities can also come into play here. This is the Sunbus journey planner to get from Gordonvale to the JCU campus at Smithfield: 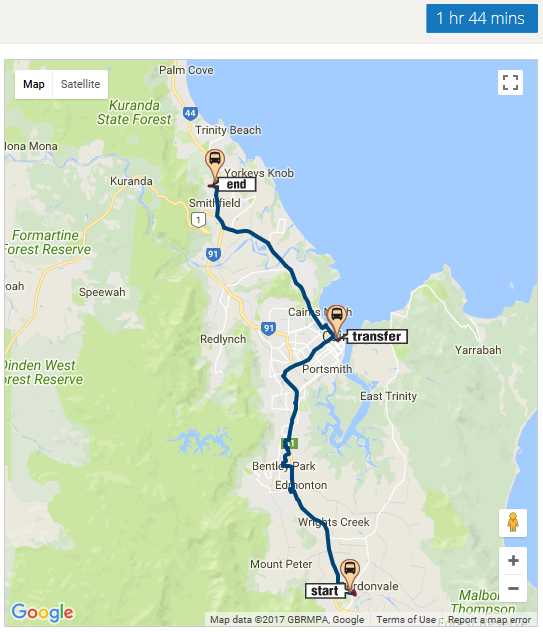 Hmmm. Best to drive which Google Maps says will only take 41 minutes along the western arterial route in normal traffic.