Update on operating results
With still slightly more than 3 weeks’ trading to go before the end of the financial year, our current estimate of the distributable profit* for the full year 2017 is approximately $11.5 million, compared to 2016’s distributable profit of $11.9 million.
While the Trust’s distributable profit for first half of the 2017 financial year was 38.2% below that of 2016, the second half is estimated to be about 30% better than that of 2016.
The Trust has already reported on its first half results on 23 August 2017.
So far in the second half of 2017, the refurbishment of level 1 of the Reef Hotel Casino complex which was completed in the first quarter of 2017 positively contributed to the performance of the Reef Hotel Casino. Overall hotel operations performed well. Overall casino operations also performed well with electronic gaming taking on the local competition more effectively.

This represents a good recovery in 2H however it still leaves RCT struggling to match the 2013 – 2015 performance: 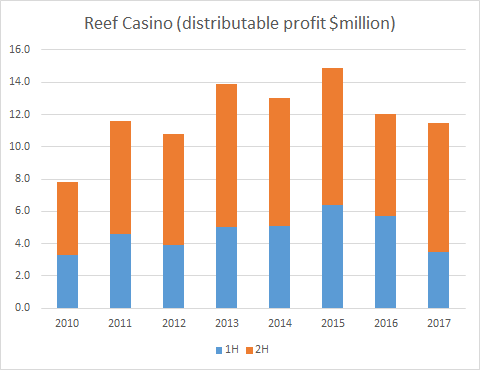