It was a big week for regional employment data to play with. The regional SA4 stats from ABS were out on Thursday as covered by Conus: Regional jobs data shows regional QLD employment growth at fastest pace in a decade

The same day saw updated quarterly numbers to June for the Queensland state public service. Nick Behrens has noted on Twitter that growth currently appears to be running ahead of population growth which may not be consistent with stated fiscal principles. Nick has previously posted on this and the public sector component of employment: Queensland Public Service Headcount: adhere to the sixth fiscal principle or jettison it; Debunking myths about public sector growth and Queensland’s jobs market.

Sunshine Coast Hospital opening during the year may be responsible for at least some of the outsized growth there. A direct comparison of Cairns and Townsville is interesting. 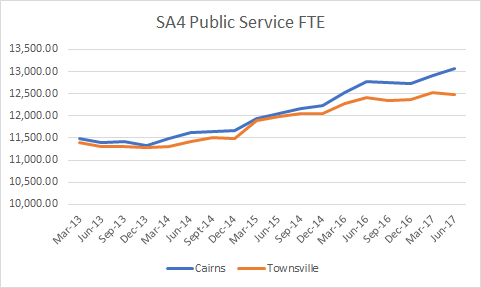 Ha! Take that Townsville and we will have a bigger Christmas tree too!